So questions i have... pretty sure the deck is not cored.. can anyoje confirm that all i can see is glass and gelcoat which is quite thick... was gonna plug everything with epoxy and redrill anyway just to be on the safe side ??

another question is in relation to backing plates i was thinking about going with stainless... thoughts? I xoeriences?
Next job is making a plug for the mould for the new hatch i have decided after much utubing and a spring clean im gonna carve it outta foam and cast one that fits water tight ...
so does the hatch open forwards or backwards? One thinks front opening for ease of sail and spinnaker /boom etc or rear wards to prevent water coming in while sailing ??
mmm thoughts? Suggestions?
cheers in advance nearly got half the boat the way it needs to be ... sanding is just so full on its a bit slow going...
Still its not needing too much more work to be seaworthy mostly this is now a part restore... so the inside is nice for the partner and guests ... :) 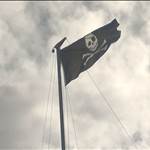 Sounds good broomstick, here's some pictures of my forward hatch, mine does open backwards, but i haven't found any issues yet, but i do wish id made it easier to work as a fresh air vent. but it never leaks water.
And yes the Deck is solid glass, no core.As for backing plates, i used a mixture of Stainless steel mudflap washers and Stainless steel plate, Aluminium will work but it will corrode quick.

So last night was productive now have all the paints and stuff i need from Boat Paints in Freo , Gary was super helpful and gave me great advice he knows the boat well... got colour matches paint for touchups and a 2 in one primer and topcoat that will need 2 coats and job done... a very light grey in colour... Gary had used it on his amazing metre boat reno...
So went to 60 grit on the random orbital sander works great also discovered a lot of the flakey stuff comes off with a scraper ... also found the best fibre glass matting super strong stitched stuff this will be super strong for all me repairs just what i needed ... so all glassing with be with 650 chopstrand then a layer of super matt and then 2 more of chopstrand which can all be done in the one pour which is cool...
touch up paints means i can now plug all the swiss cheeze holes and get ready for bedding down hardware....
Gary advised that 1/4 inch ply would be fine for backing plates so i might do that to save time and money....

so a funny thing happened there was all this discoloration that looked a lot like it was half painted... turns out just grime mould whatever it was all came off with cloudy ammonia worked so well... i had previously tried sanding this stuff off with no joy... cloudy just stripped it off like it wasnt there, saves me a lot of sanding so will just need a light sand for mechanical bonding and we are getting close !!! 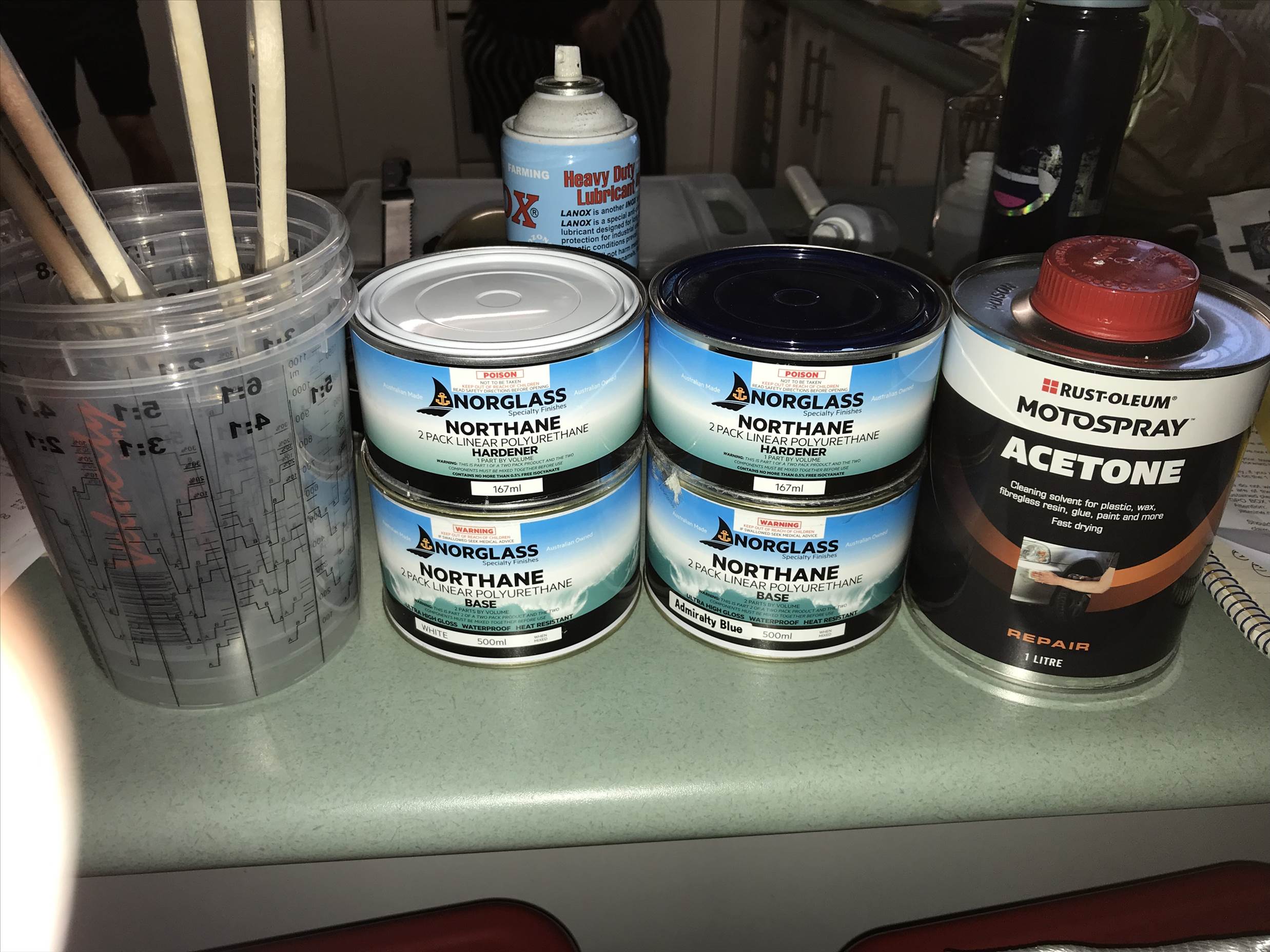 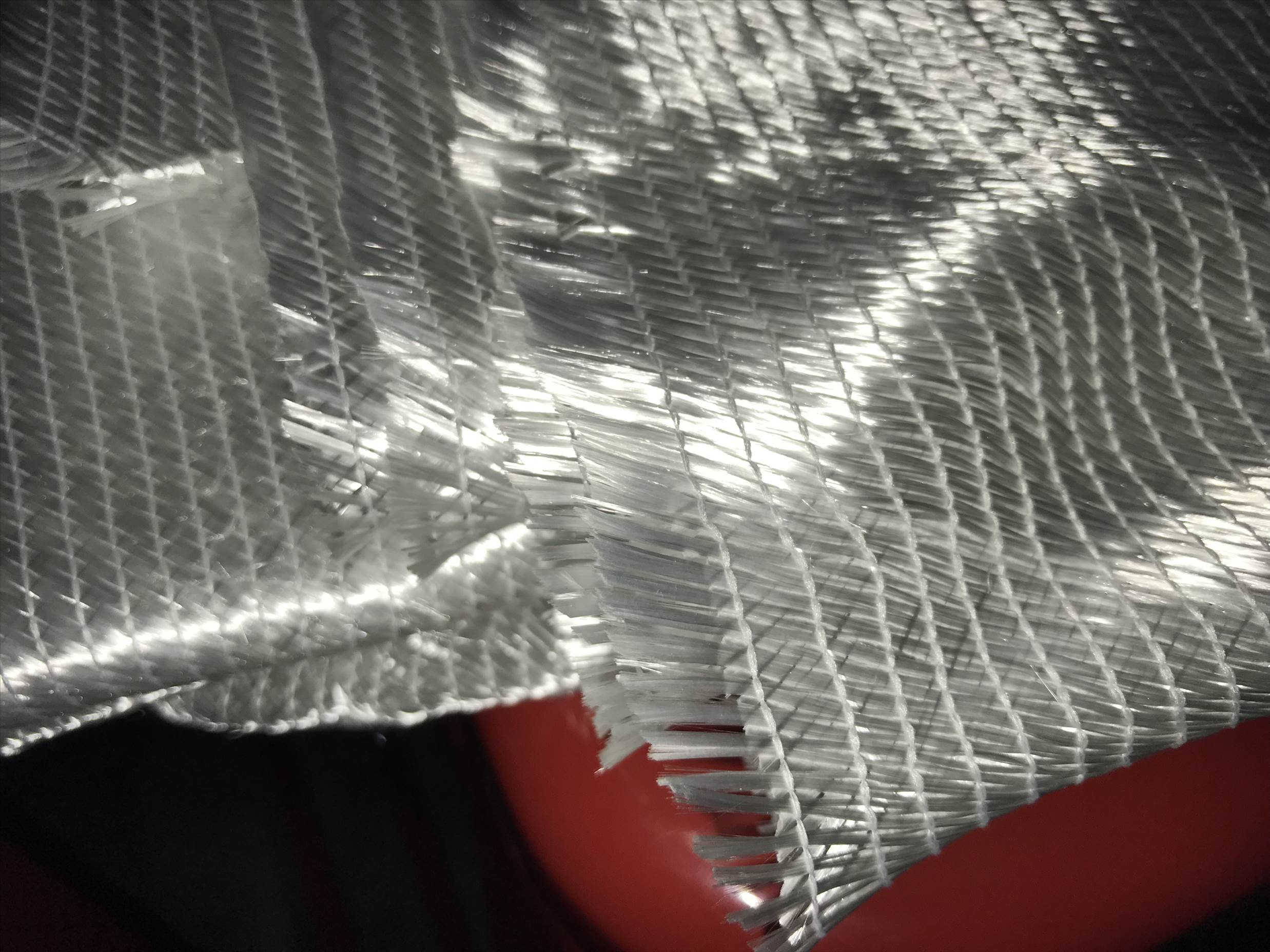 Thats the super matt in the second pic bought 3 metres so chunky!!!!!!! 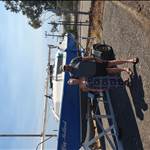 This thread is going to help us so much. We were given a RW in Jan and have had some real bloopers getting her off the trailer, slowly getting her fixed up until we can get a trailer build.

The main problem we have is getting the trailer out and propping her while we work.

1st attempt she fell over, slight damage but not back in the trailer but not very stable and can't work on all of the hull. 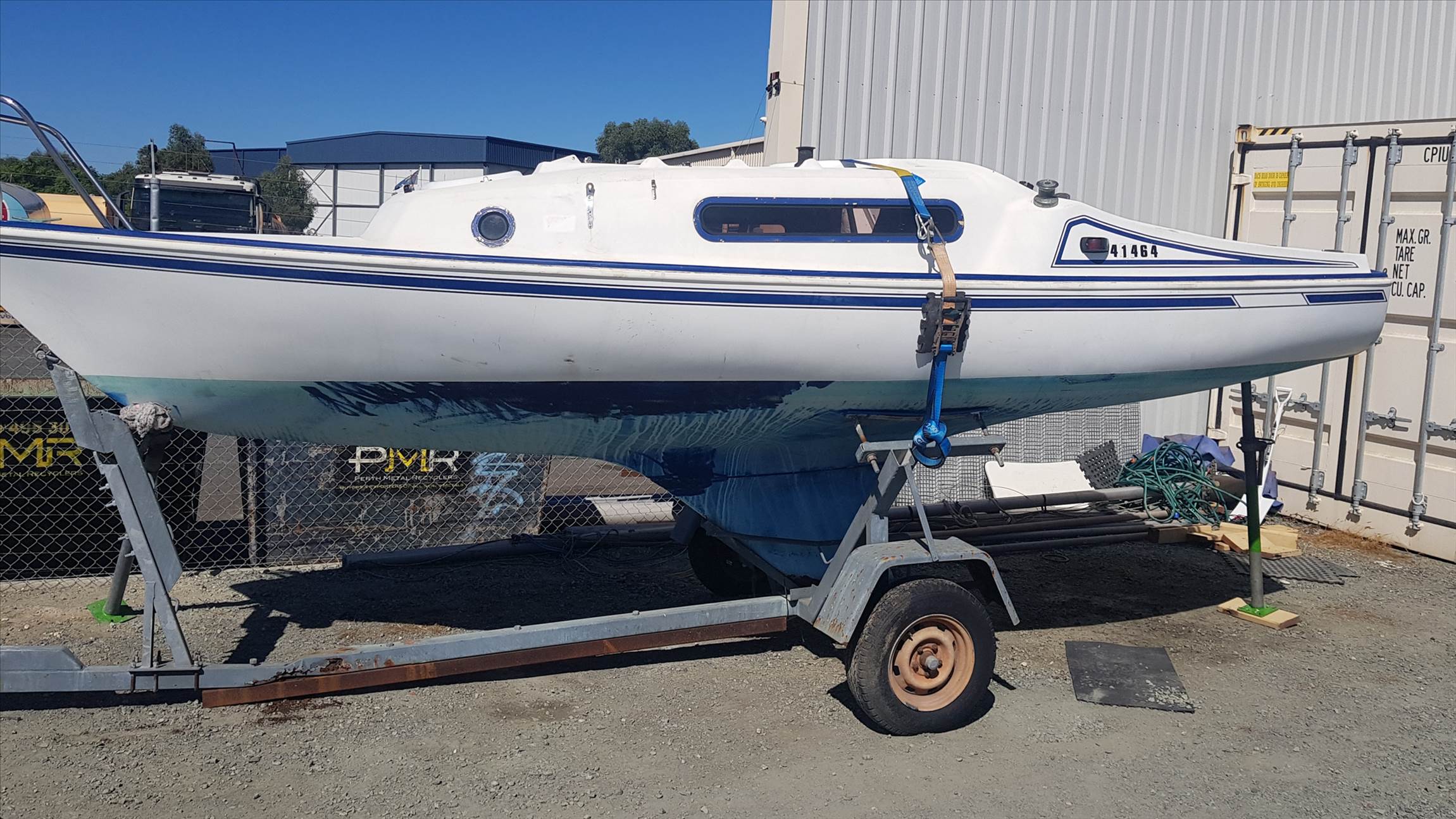 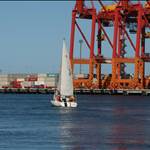 Dave we are a few bays down from you at NYC. Every time we walk past my dad is impressed by your work on Summer Soul... I was hoping we could put it undercover at his place and he could repaint it over the winter but then he went and un-retired so I don't know when that's going to happen.

Had a new mainsail made up after ours got yet another hole in it and that's been a good purchase though of course the boom is not quite standard and so the outhaul pulleys get in the way... 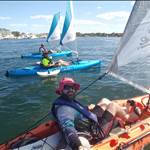 Select to expand quote
Dave T said..
Thanks Stu for this post as it has been both an inspiration and source of information with everyone else also contributing. I bought a Red Witch in Jan 2017 and after sailing her for a few months, towed her home for a refurb. She started out as "Warlock" which is not a very feminine name for a boat, so we also renamed her "Summer Soul". 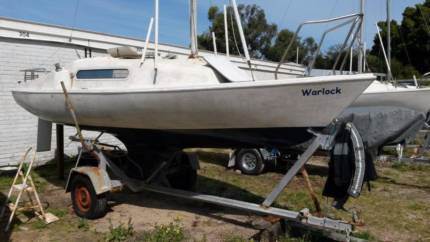 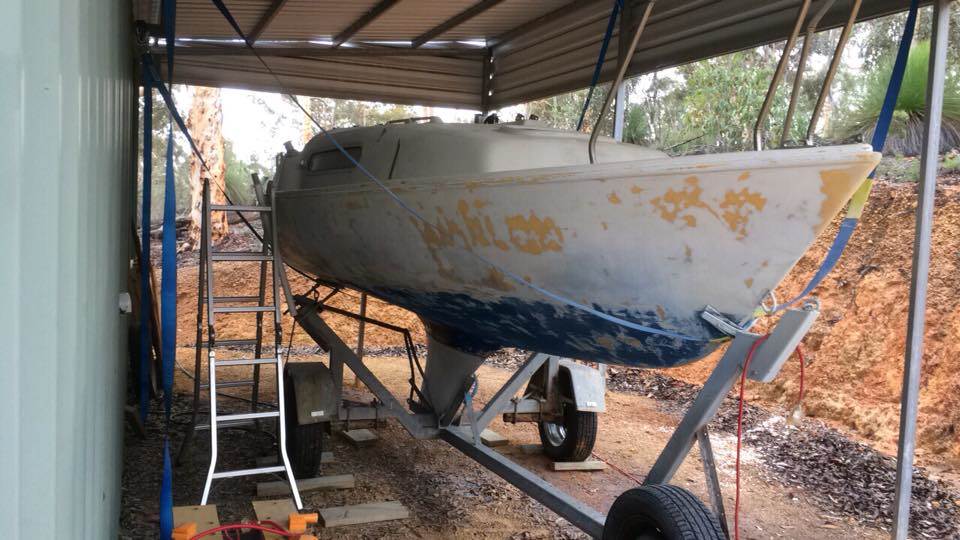 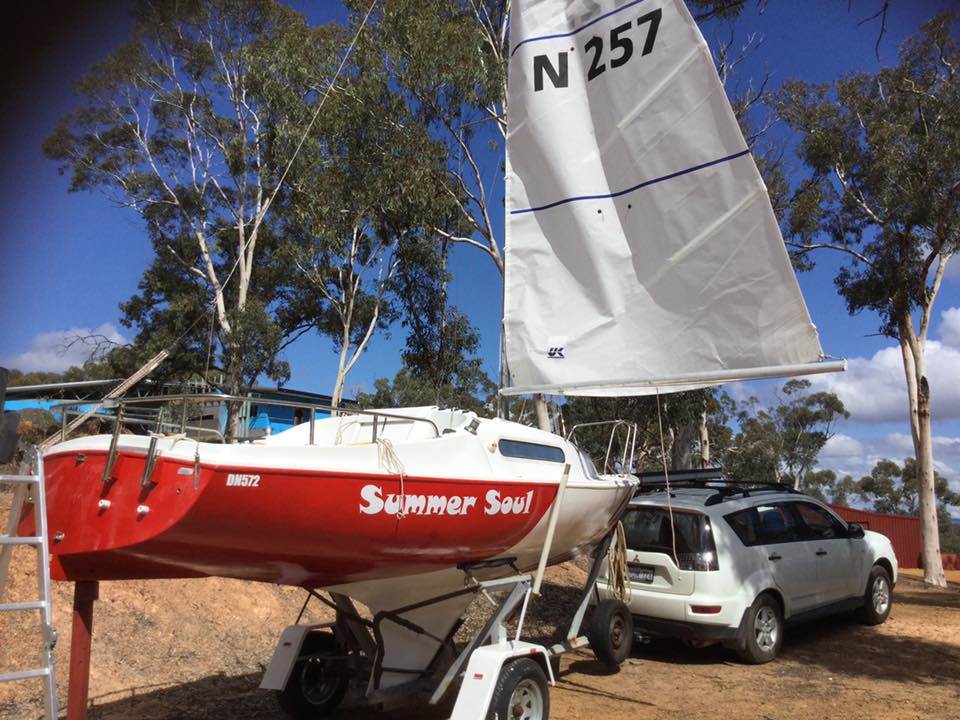 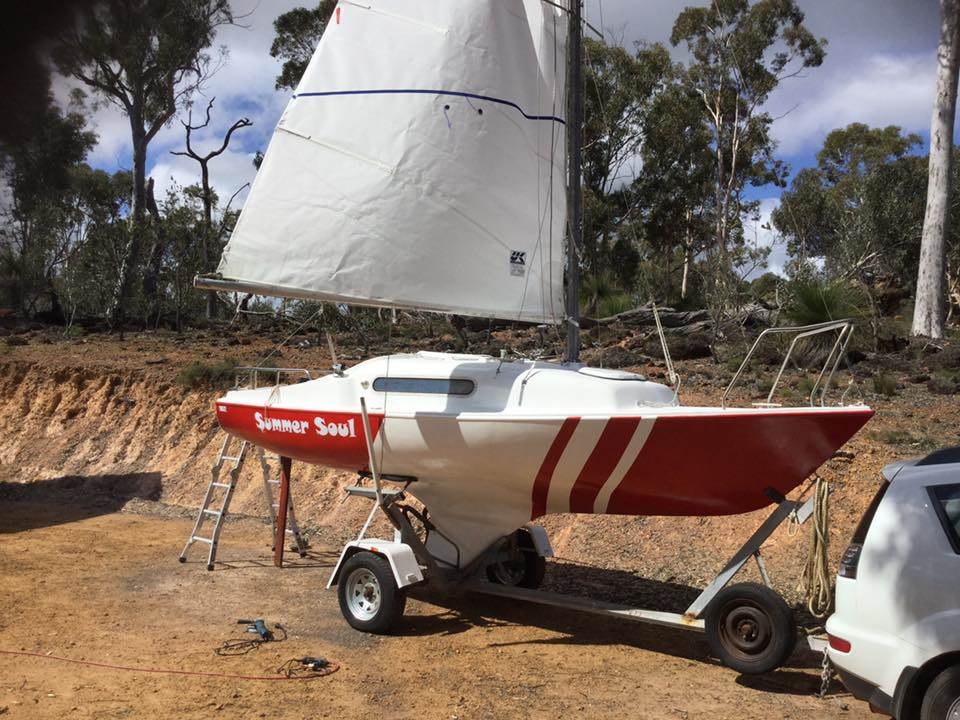 Our boat is based at Nedlands Yacht Club and as with most people down there, we use the long rope method for launching as you will see from the rope hanging on the front of the trailer. Personally, I back the SUV until rear wheels touch water. Then rope is looped around tow ball, lift hitch and let out rope with one hand whilst guiding trailer down ramp with the other. You do have to be prepared to get into the water up to waist deep, however if you don't want that cold water shock, one of the members has fishing waders that he uses when launching. To get her out, I just hook up the other end of that long rope and pull her out. Obviously, all this is made easier by having the third wheel close to the tow hitch.

For those who have been wondering about the weight, officially Red Witches have a Displacement of 650kg (295kg of which is the keel). 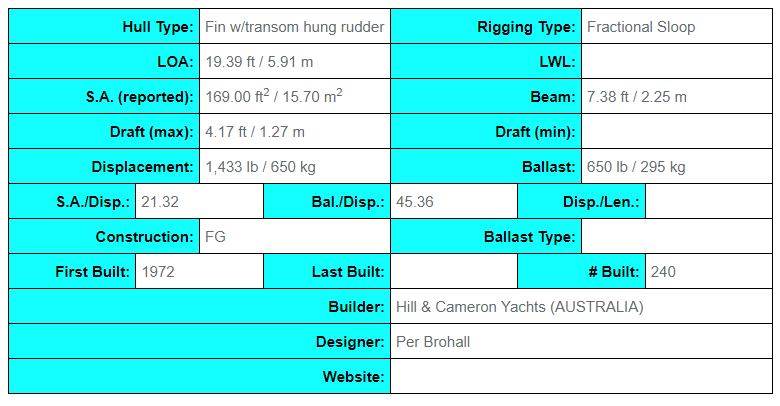 Therefore, your trailer would need to be less than 100kg for it to be registered for
Happy sailing and thanks again for providing such a great source of info and discussion.


Hey Dave, Warlock may be my old neighbours boat (many many years ago). My older brothers used to sail it in the early to mid eighties. Guy who owned it lived on/in Mt Nasura, Tony was his name. Summer Soul looks brilliant now!

Was thinking of buying one but my brother remembers it being a nightmare to launch. Wish one of you guys could take a video of the process so I can make up my mind. :)

Select to expand quote
Stuman92 said..
Well Thats starting to look the part
all together and looking the part, putting tyres on rims was not enjoyable. 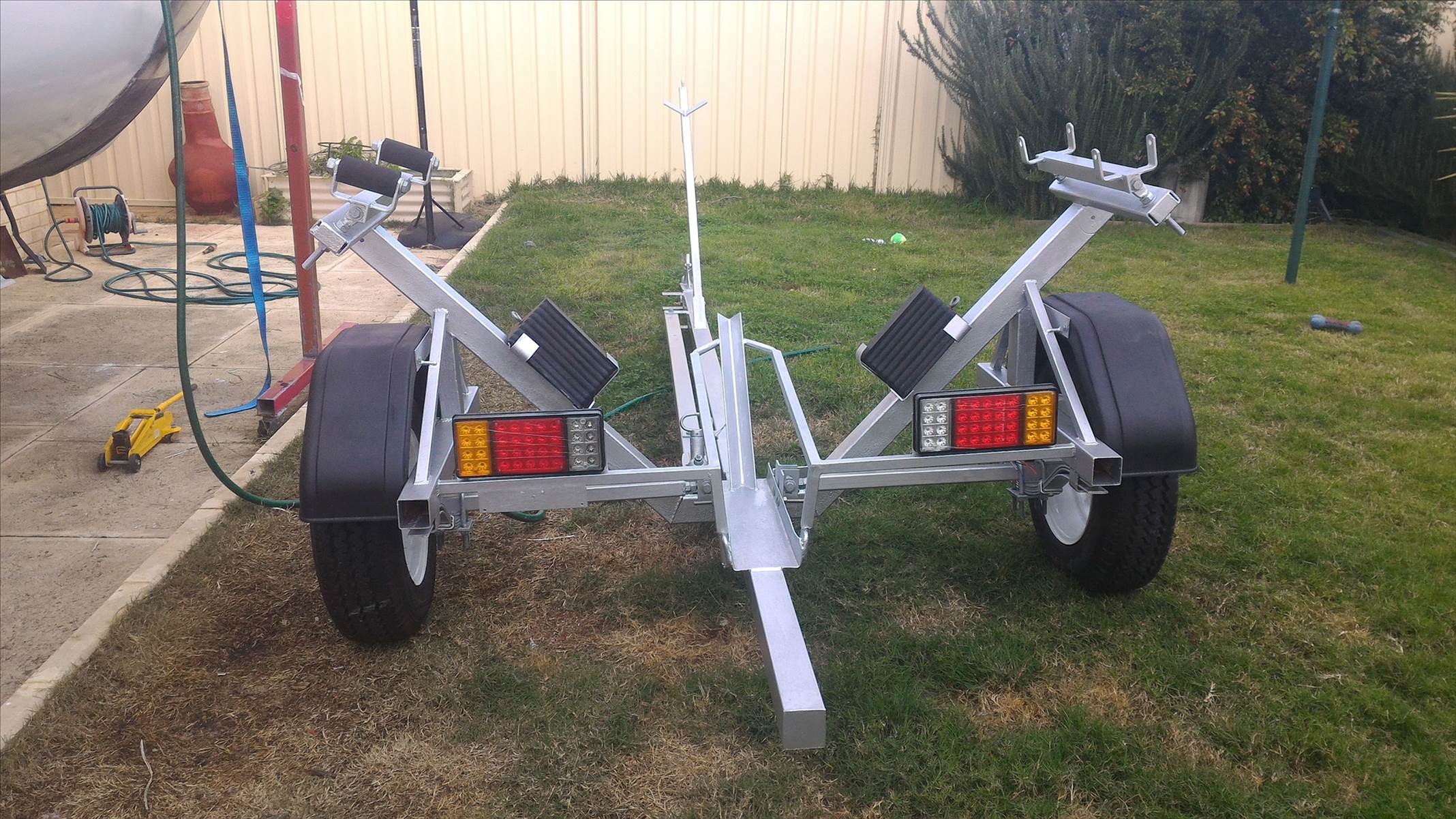 Must admit im loving the paint on the trailer, looks like a bought one :) 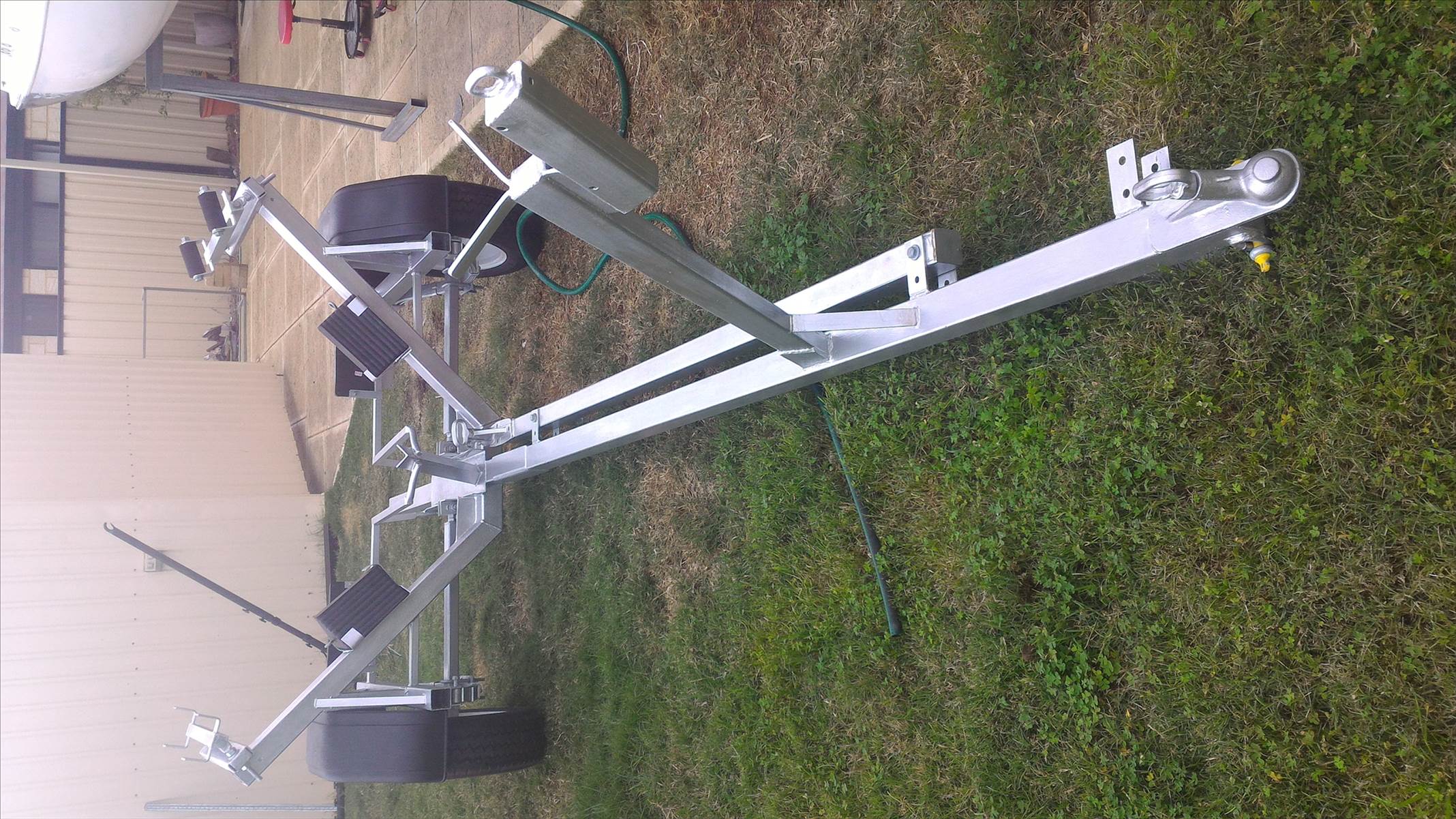 not sure where ill mainly sail from, im in wattle grove,
ive tried to get in touch with the redwitch association a few times but never heard back......

hahaha depends how bad yours is, but im always ready here to help.

just finished gluing the rubber to the keel support section.
and the wiring 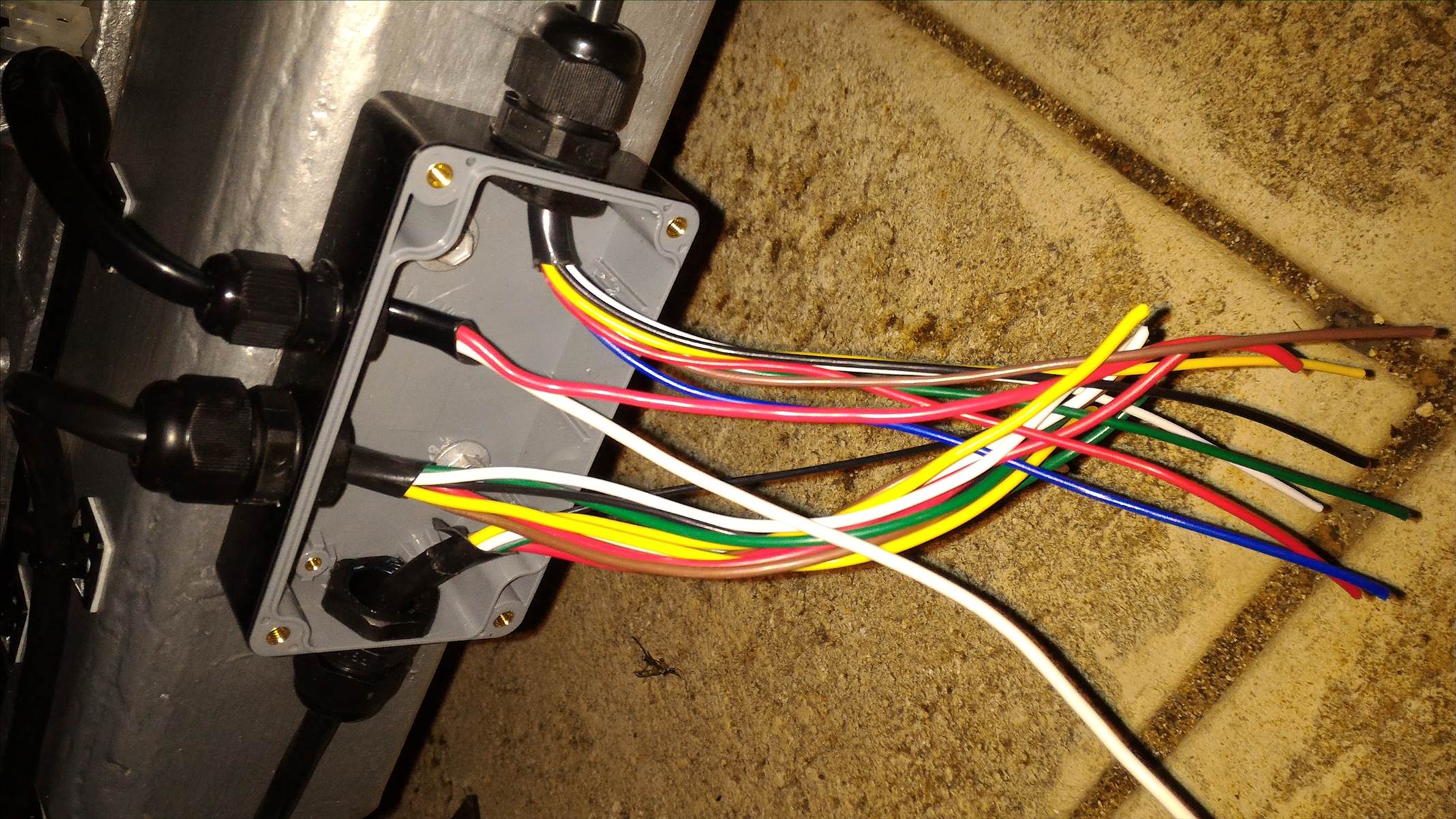 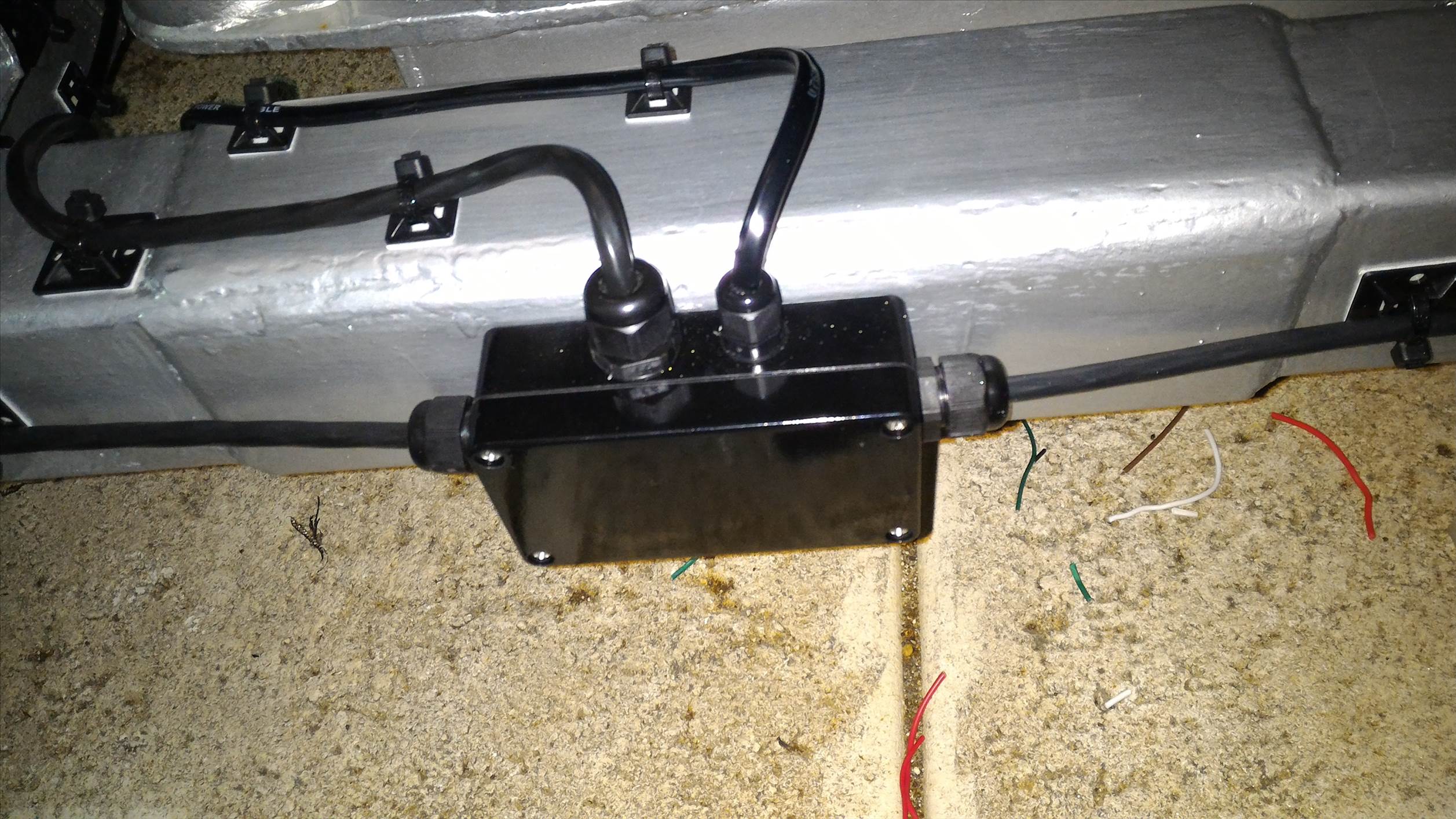 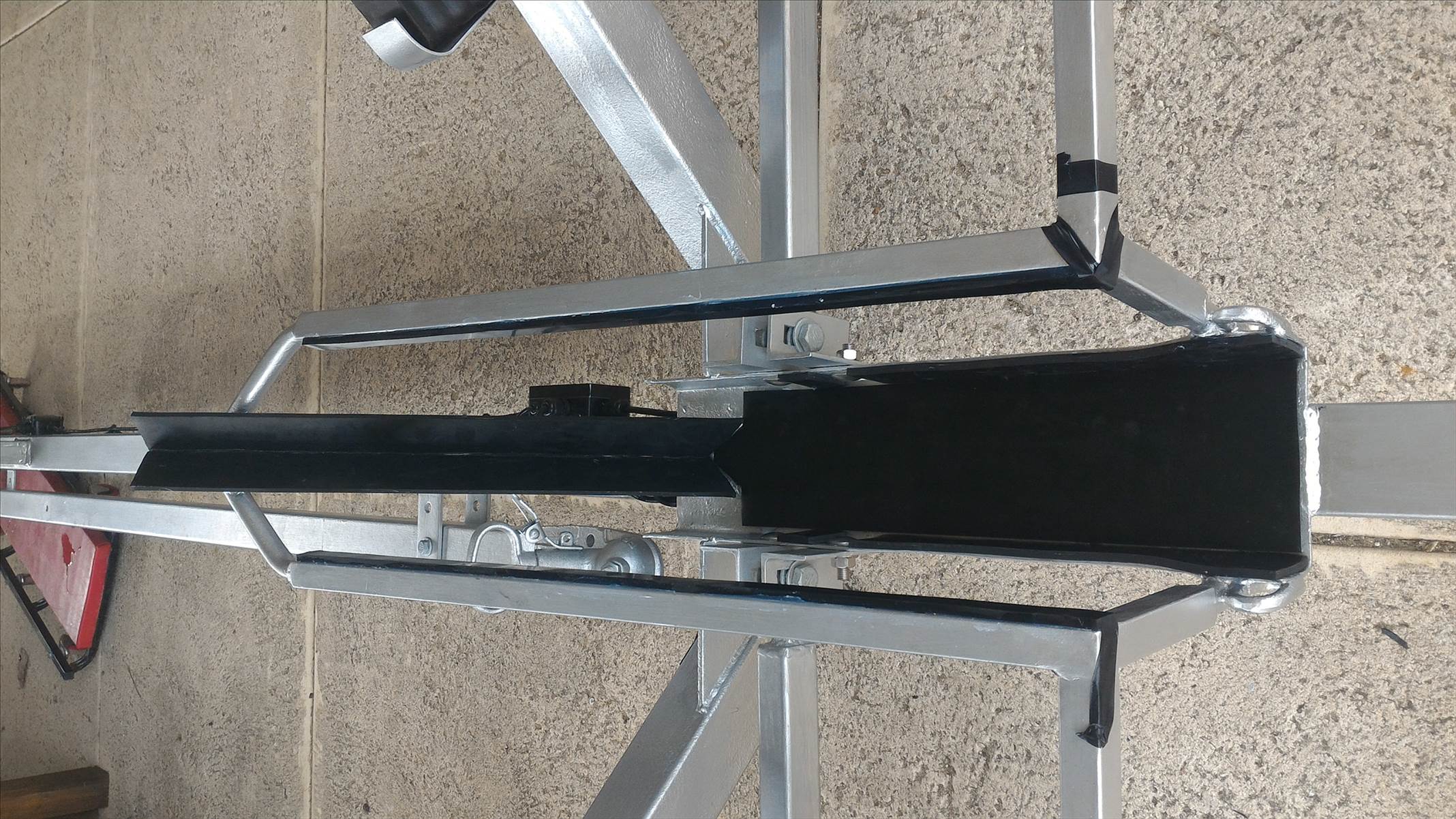 Looks like an awesome trailer ! I plan to rebuild / start nee with mine.
Couple questions;
Do you know what towball weight you are running with ?
I can kinda see in the photos but how far forward past the wheels does the keel sit?
Also how do you go launching with the fixed bar ? Does it make it much easier ?