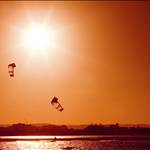 I know there has been a few reviews on this kite so I'll just let you know of my impressions...

* Initially the kite has an almost overwhelming amount of power, I was fulled jacked on the 12 in those conditions, and the kite does a give a bit of a "if I loop this kite, I'm going to die" kind of impression, but in saying that, comes the boost:

*boost on this thing is fun as, really nice lofty jumps, with a fast kite that allows you to keep working it through the window for maximum hang time, you do pick up a fair bit of horizontal speed through the jump with it, so you want to give it a nice send right before you land to save your knees from collapsing

* Depower is good, but not as much as some other kites. Dropping the bar, the kite doesn't float kindly down like a rev would, still maintains a fair bit of power in the fall if put on suicide.

* once the wind dropped I started trying it unhooked -

initially you feel a large pull, really does make you accelerate through the air. But once you get used to that, your jumps just feel really powered and solid. The grip on the bar makes re-hooking really easy without risk of clipping your saftey ect. Does have a little bit more in air pull pressure making passing the bar a bit harder than some other kites.

Build construction is great, looks a bit weird in the sky, but really makes for a fun kite to fly. Solid in all area's, is going to be a big competitor to some of the more hardcore wakestyle/freestyle kites on the market this season.


Demos available at Sunshine Coast Kitesurfing in Maroochydore if your keen to try it out.