high as a kite 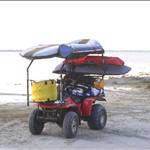 high as a kite

Had the chance to demo the Konrad Surf flyr 1296 foil over the past few days.
First demo - 10 to 12 knots on a Konrad pocket 4'2" with 12 meter Airush ultra.
First attempt - major fail, bucked me off. Even though i knew it would have heaps of lift i dived the kite too fast thinking i needed to because of the light wind.(wrong).
Next attempt i dived the kite slower - up she came and away we go. Was really surprised once up and going i pretty much used my normal stance and didn't have to adjust much at all.
Stuffed up first gybe big time, not used to so much lift. Only got a couple of runs in before the wind died.
Critique first go. Move foil all the way back and use smaller kite.

Next day - 13 knots gusting to 18 on occasions- on 9 meter.
With the smaller kite and foil all the way back this foil was so easy to ride. Tracked up wind with ease and never felt like breaching.
There where a few times during rain squalls i had the chance to test how fast it would go. Not sure of the speed but at no time did the foil behave badly. The speed capability of this foil really did surprise me.
Glides through the gybes but it will take me a few more days to get feet transaction down pat.
Because of the cold water I decided to ride toeside rather than switching. I would be the first to admit that i hate riding toeside but for some reason i found it so easy on this foil. Go figure.
On a good day i would usually last about an hour on the water. Yesterday, an hour and three quarters with ease.
Loved this ride so much i bought it. Thanks Ocean Surf Co Adelaide.